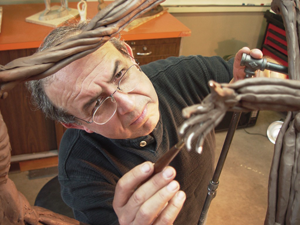 Telling stories with clay, bronze and his inner voice. Sculptor Eduardo Gomez Rojas is guided by a sense of empathy with others. Eduardo is a sculptor who has the ability to capture what he sees and is able to reach into the soul of his subject, sculpting each person as if he had known them for years… and in the process, creating a legacy for future generations.

Born in Bogota, Colombia in 1951, I was the oldest child in a family of six.

When I was seven or eight years old, my aunt went to visit a friend who had a sculpture studio, and she took me with her. The sculptress was creating an image of the Blessed Mother in clay. I was amazed at how this could be done. I felt drawn to her work and wished that one day I could do that also.

Ever since that day, I have felt something tug me in the direction of sculpture. As an undergraduate student, I took various art classes including sculpture and carved my first sculpture out of a block of alabaster. That launched the career path that I enjoy today.

Still in college I married my wife Sheila. As very young parents, we suffered through the tragic death of our eldest daughter to childhood cancer at the age of three. Today, we have two children and nine grandchildren.

I received my BA in Economics and MSW at the University of Wisconsin Milwaukee. Years later, I returned to school at the University of Arkansas to complete my Fine Arts major in Sculpture and was admitted to their graduate school. I have also studied independently under nationally recognized figure sculptors such as David Klass, Phillipe Faraut, and Elden Tefft.

Currently on display in Usaquen, Colombia are my public commission works. Two other of my public sculptures are also on display at the Distinguished Service Memorial Park in Stuart, Florida.

Since 2011, I have been the sculpture instructor at the Lighthouse Art Center in Tequesta, Florida. I also teach in my private studio located in Jensen Beach, Florida. My sculptures have been exhibited in several museums and international juried shows and are featured in select private collections as well.

In 2009 a book was published about my sculpture work titled “Eduardo Gomez: Silent Messages”. This book includes an introduction and artist interview by Art Historian Laura M. Amrhein, Ph.D. There is also a section on my creative process, a gallery, and a catalog raisonné of my work.